【Stepless Dimmable】Set the dimming range you want and adjust the light steplessly at any time. Support to dim incandescent light bulbs and dimmable LED light.
【Open Device REST API】Connect and control the D1 with your existing home automation system like Home Assistant via LAN. Set up scenarios with different light intensities.
【Sunrise & Sunset Scenes】Keep track of the sun rise and set time of your location, so you can create a scene that activates at a fixed time, when the sun rises or when the sun sets.
【RF 433MHz Remote Control】Even easier dimming at hand, turn the light down casually with the RF 433MHz remote controller RM433 at the thrilling movie night, or on/off the light, enjoy an immersing moment.
【Adjust Party Ambience with Your Voice】Turn up/down the brightness level light with your voice command for a great atmosphere via Amazon Alexa & Google Assistant.

Note: the RM433 remote controller and base are not included. 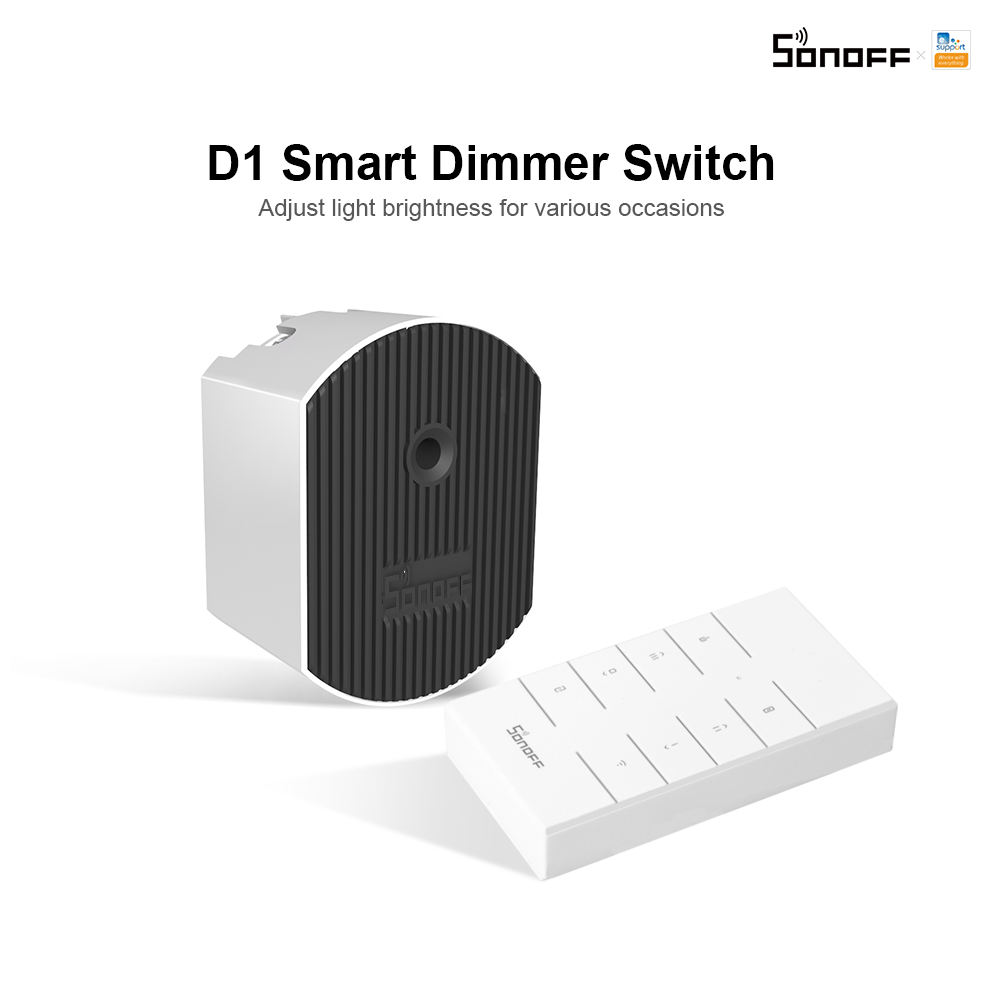 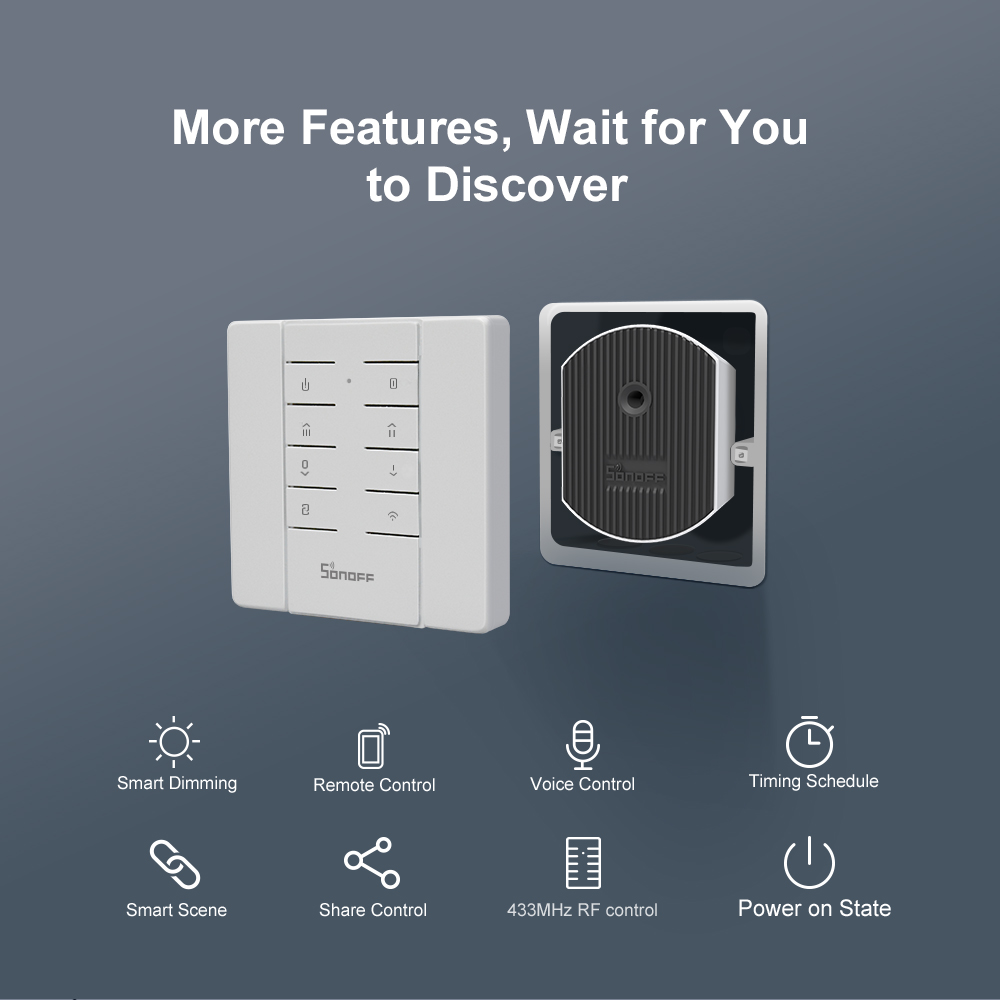 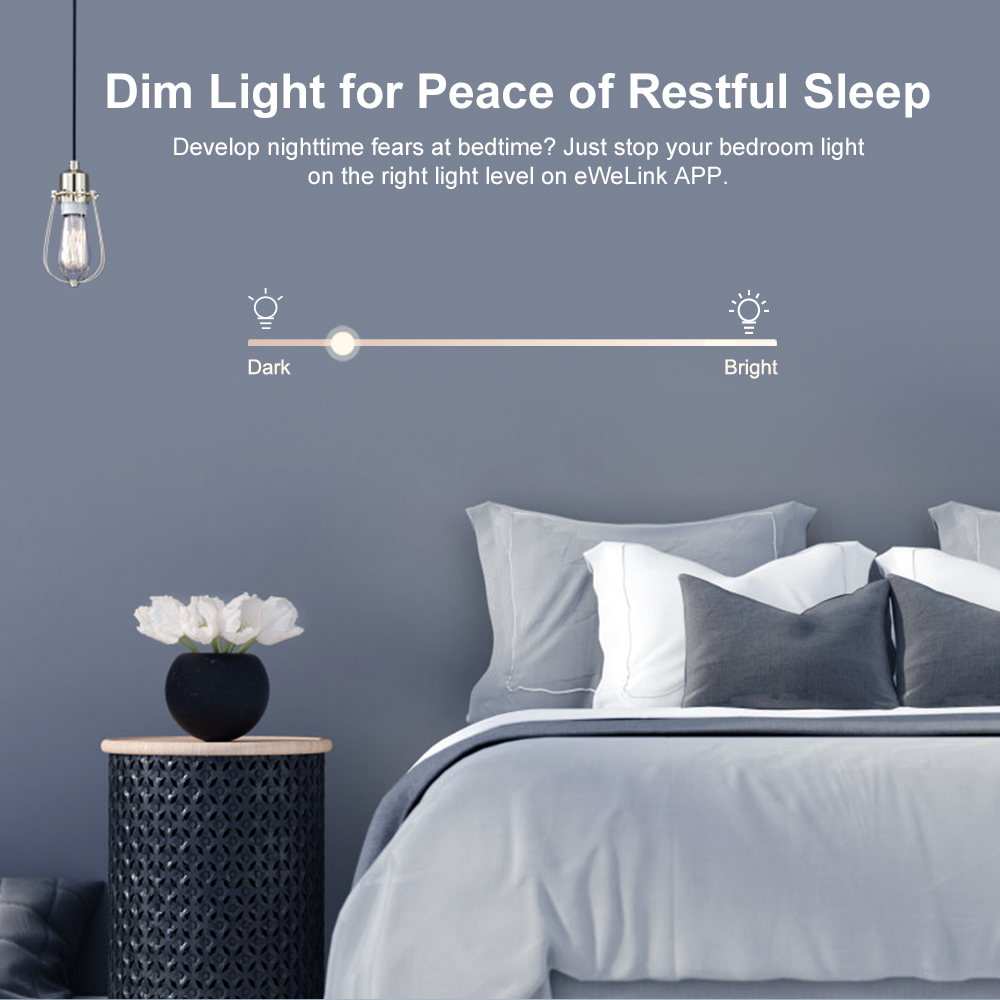 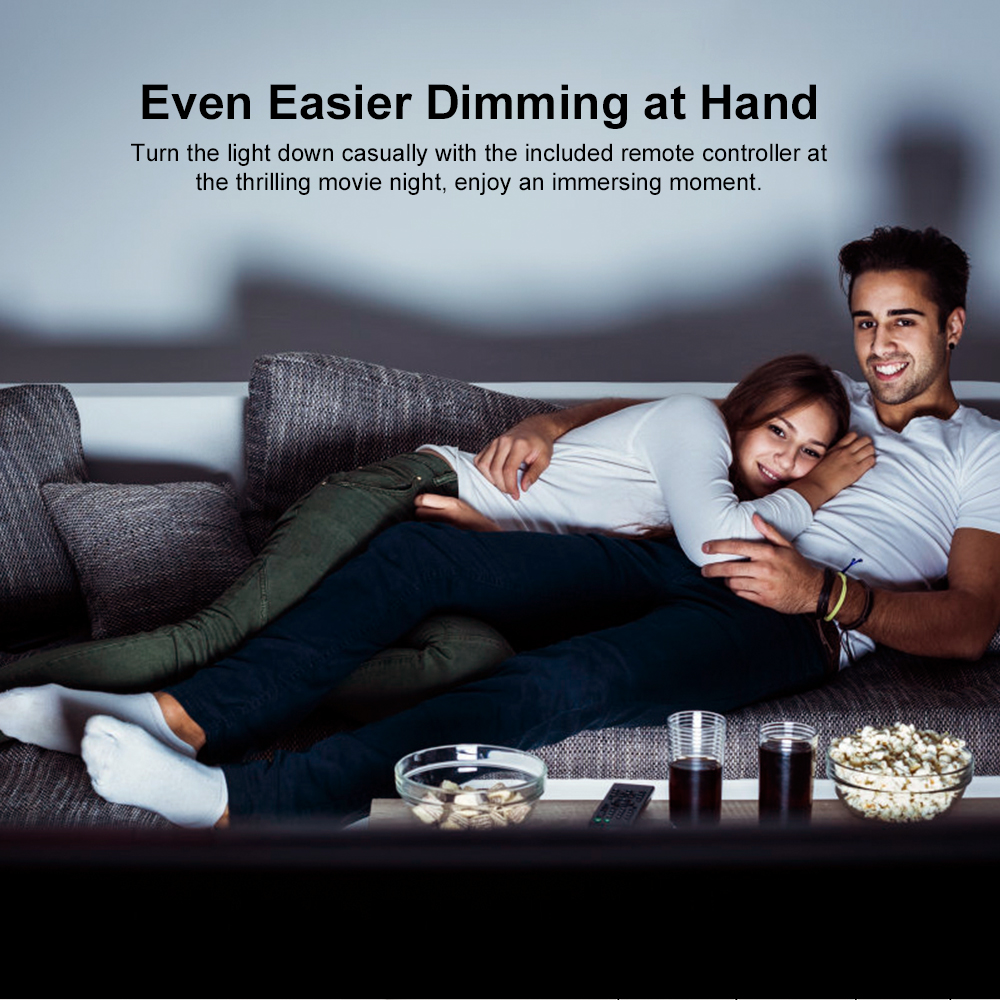 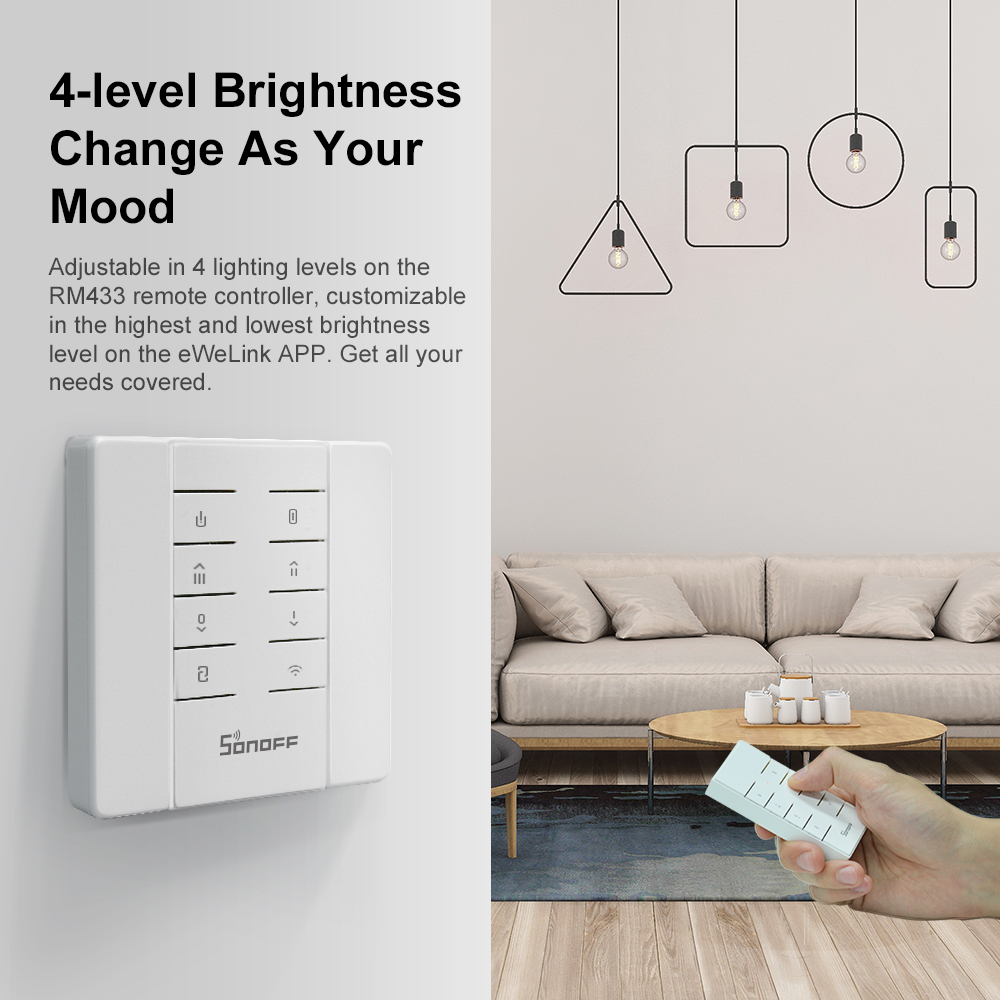 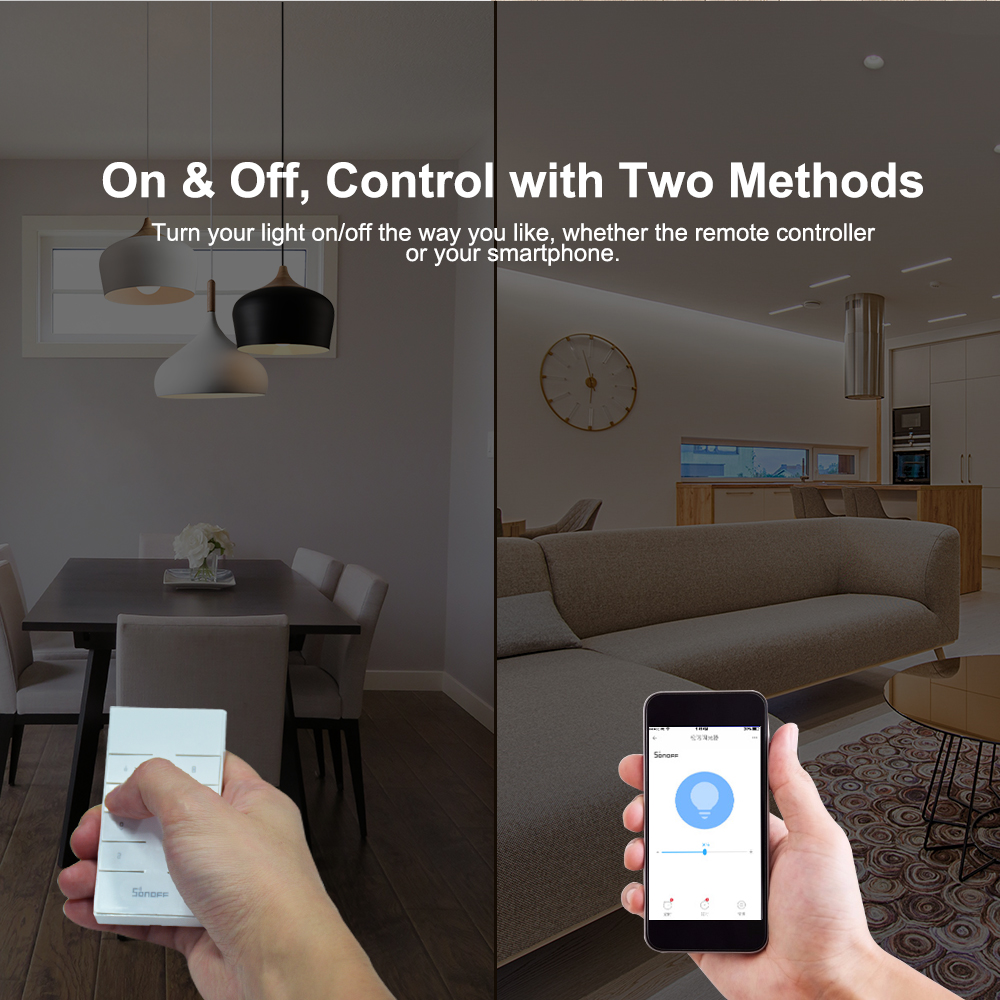 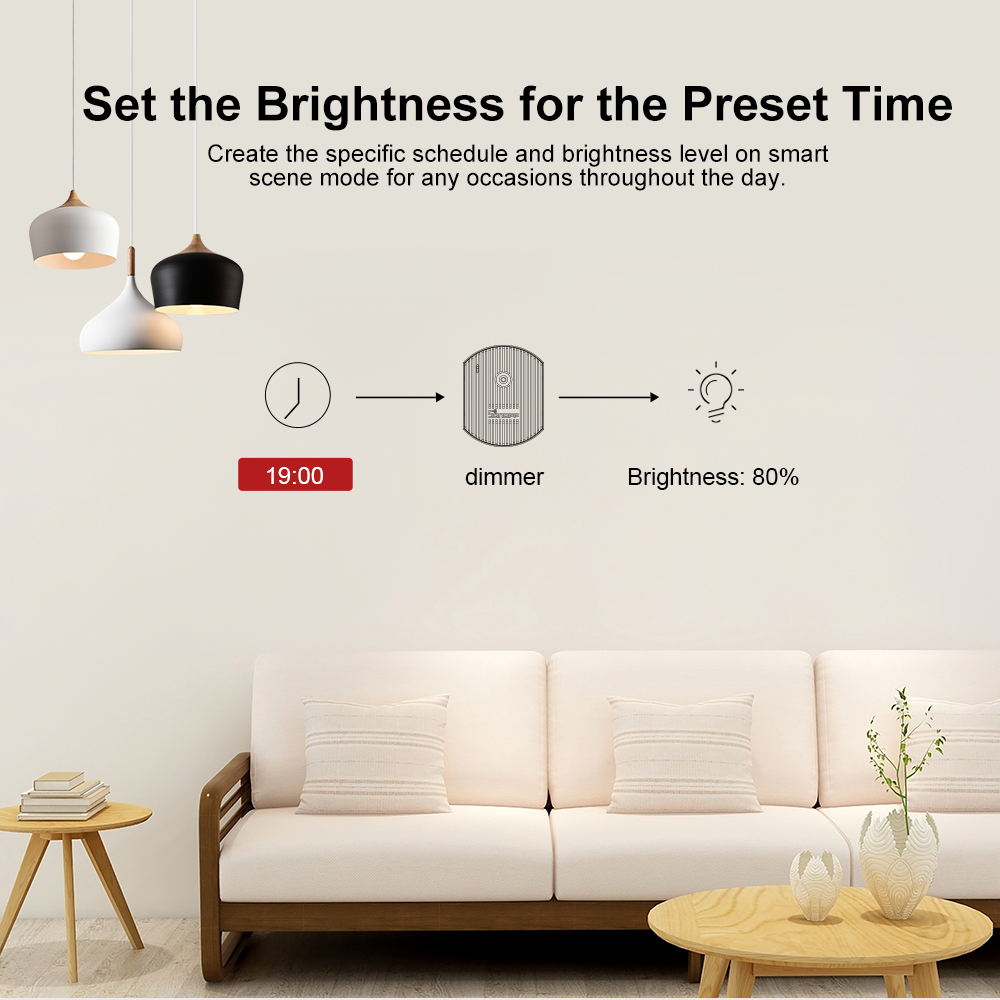 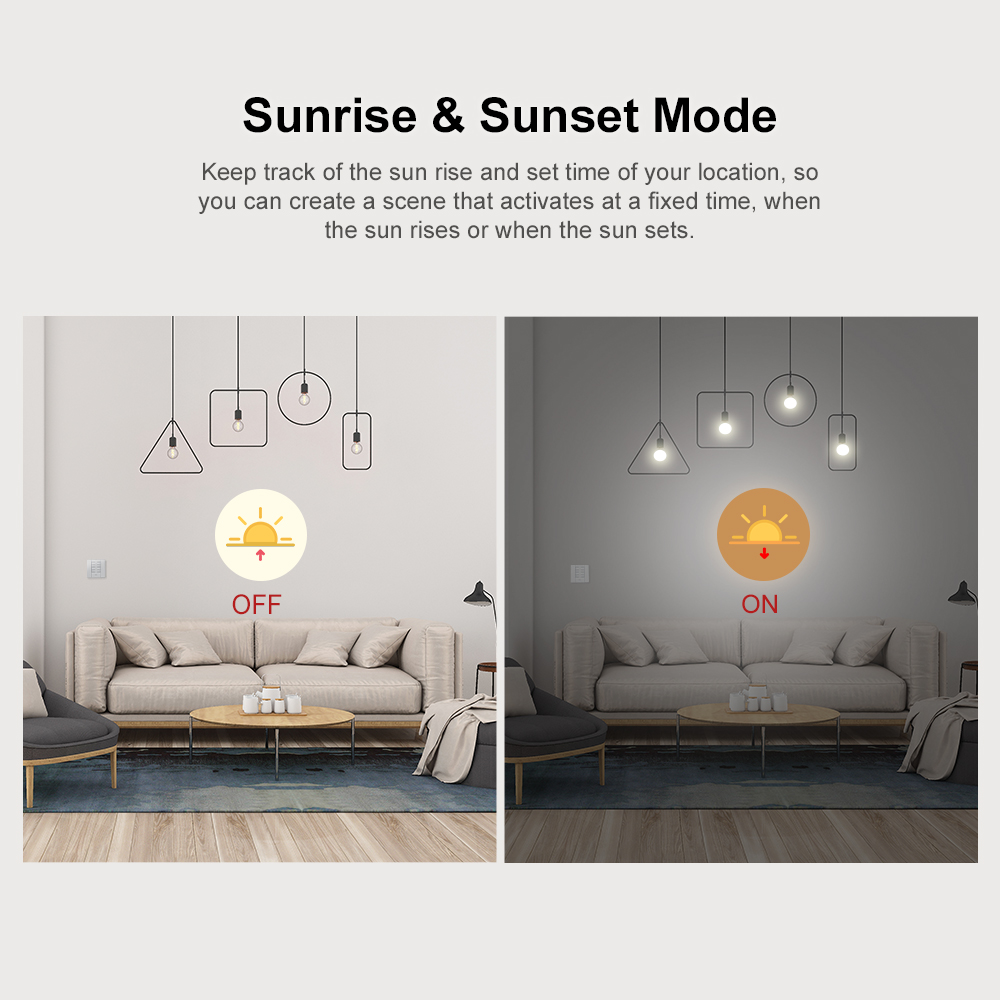 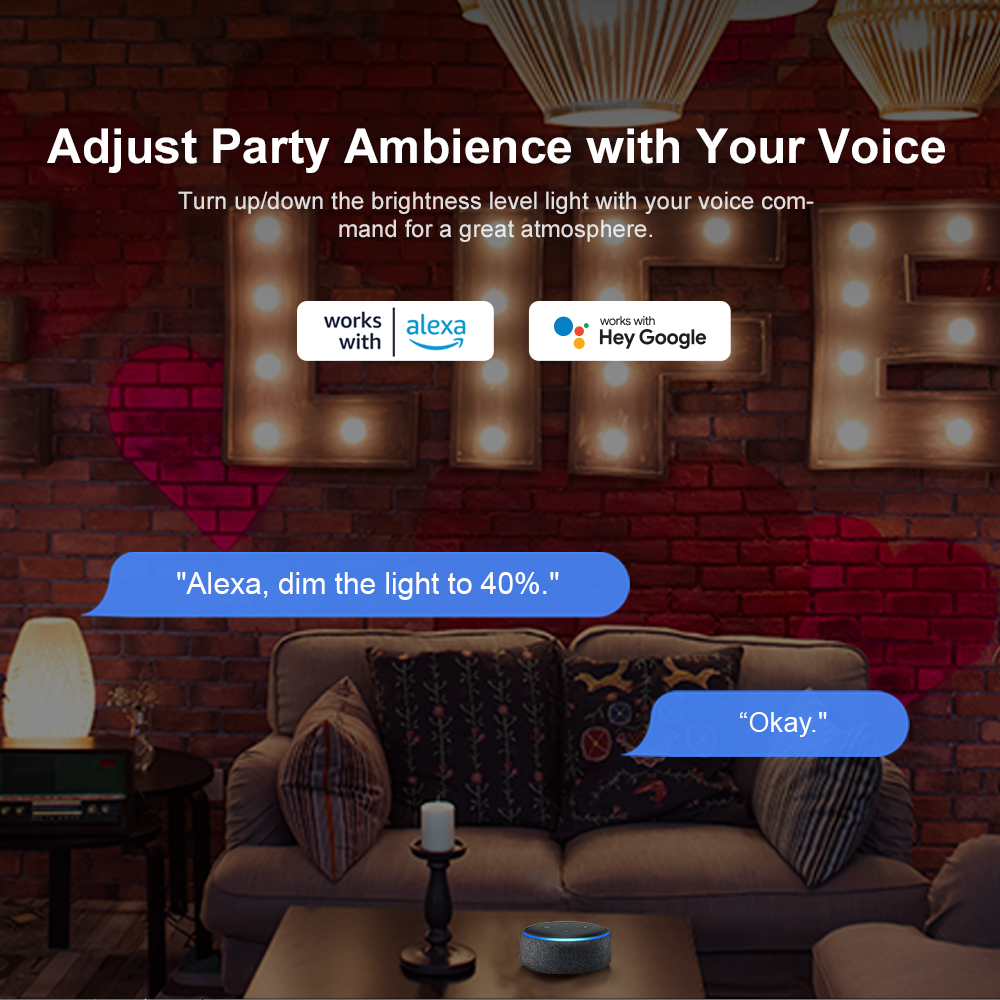 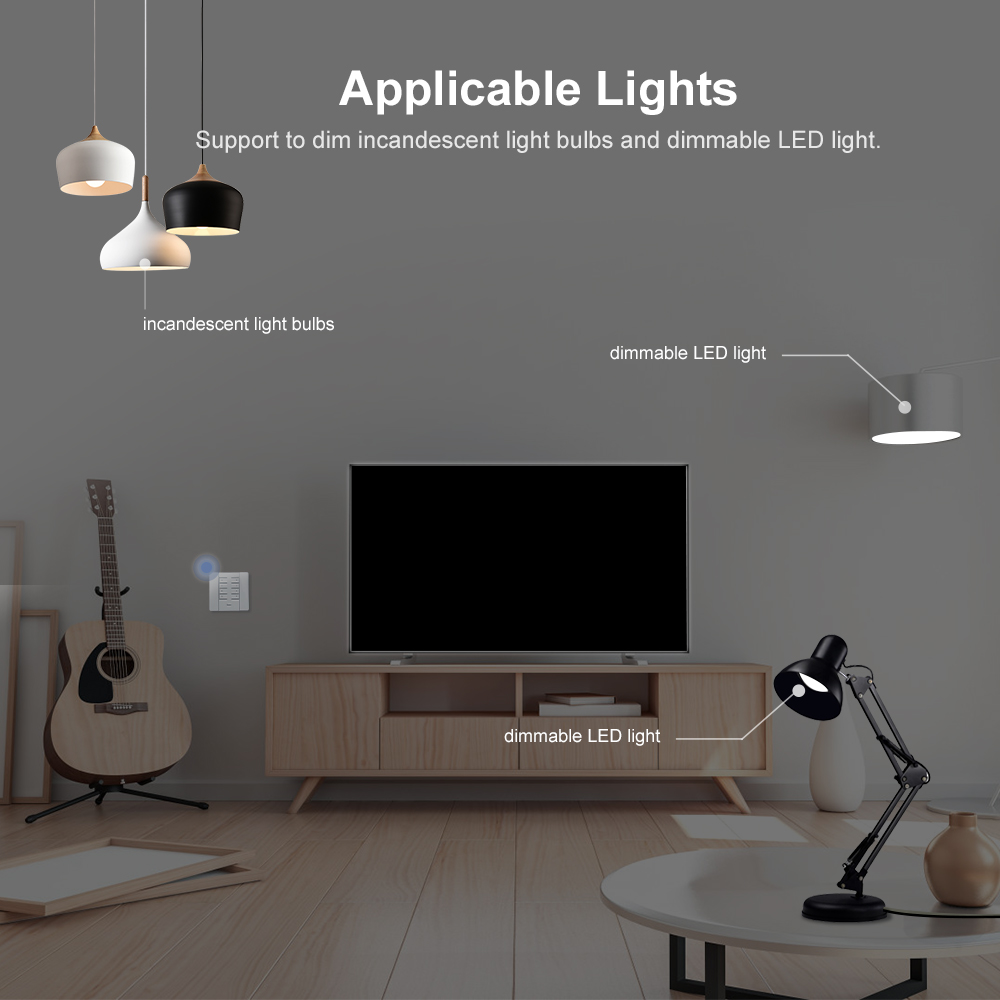 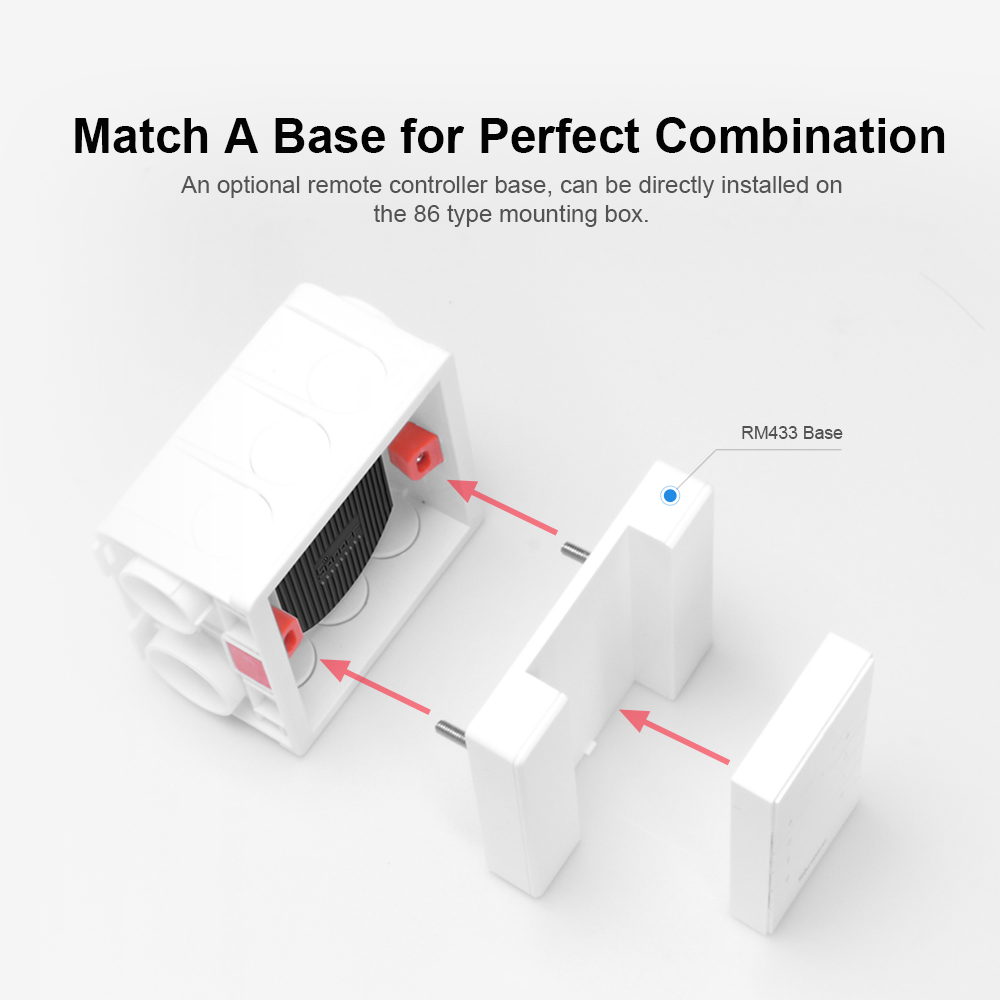 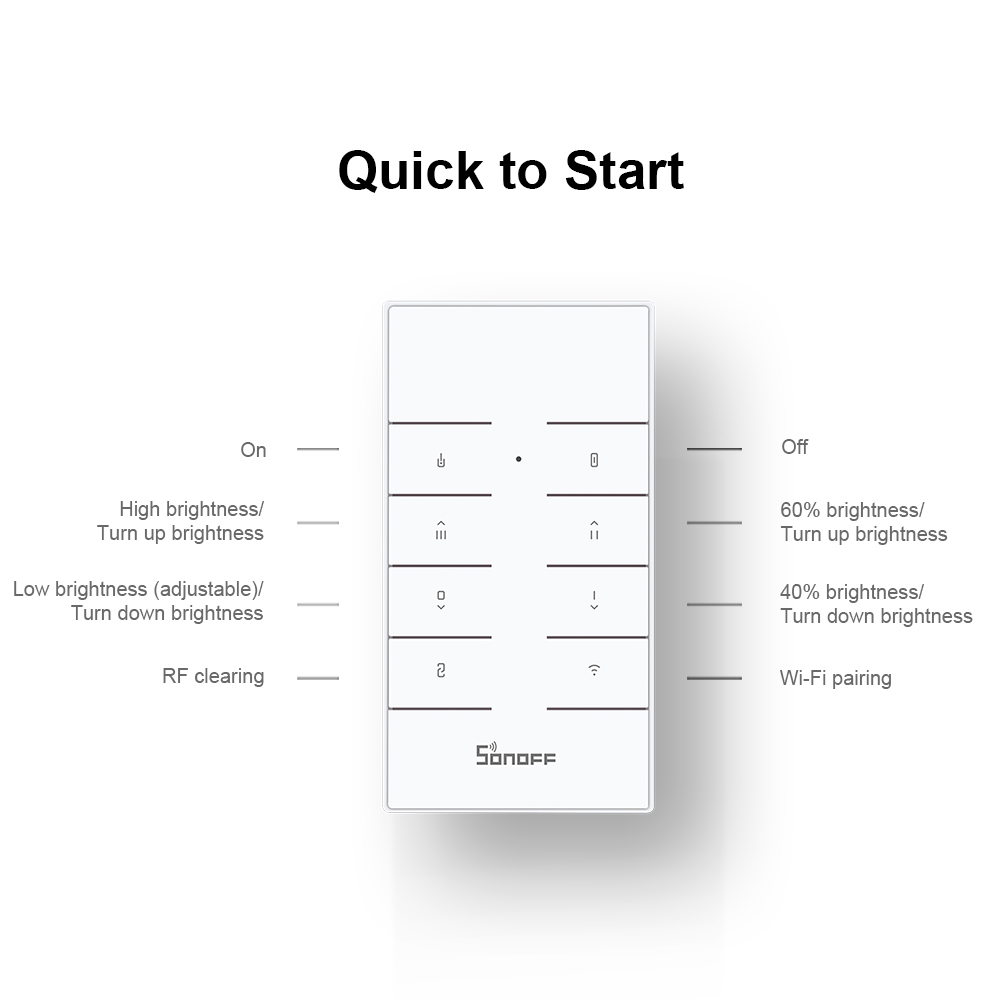 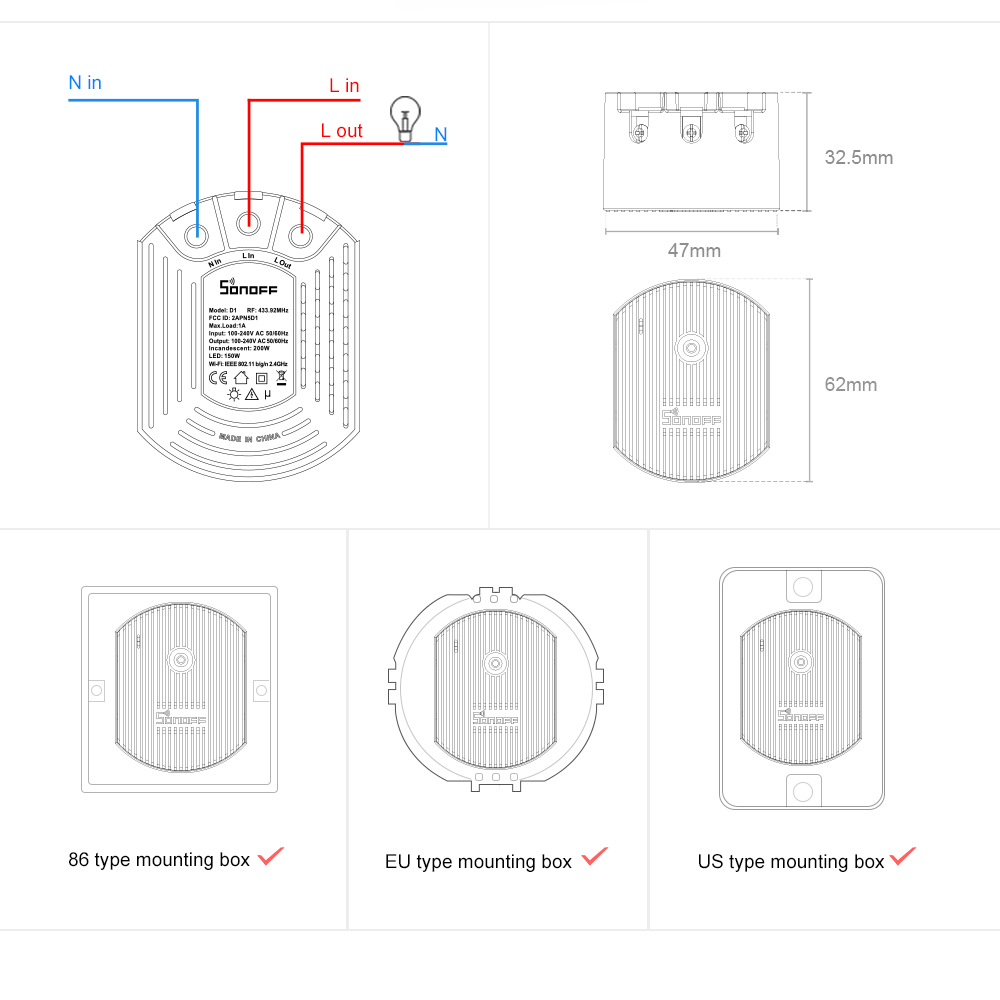 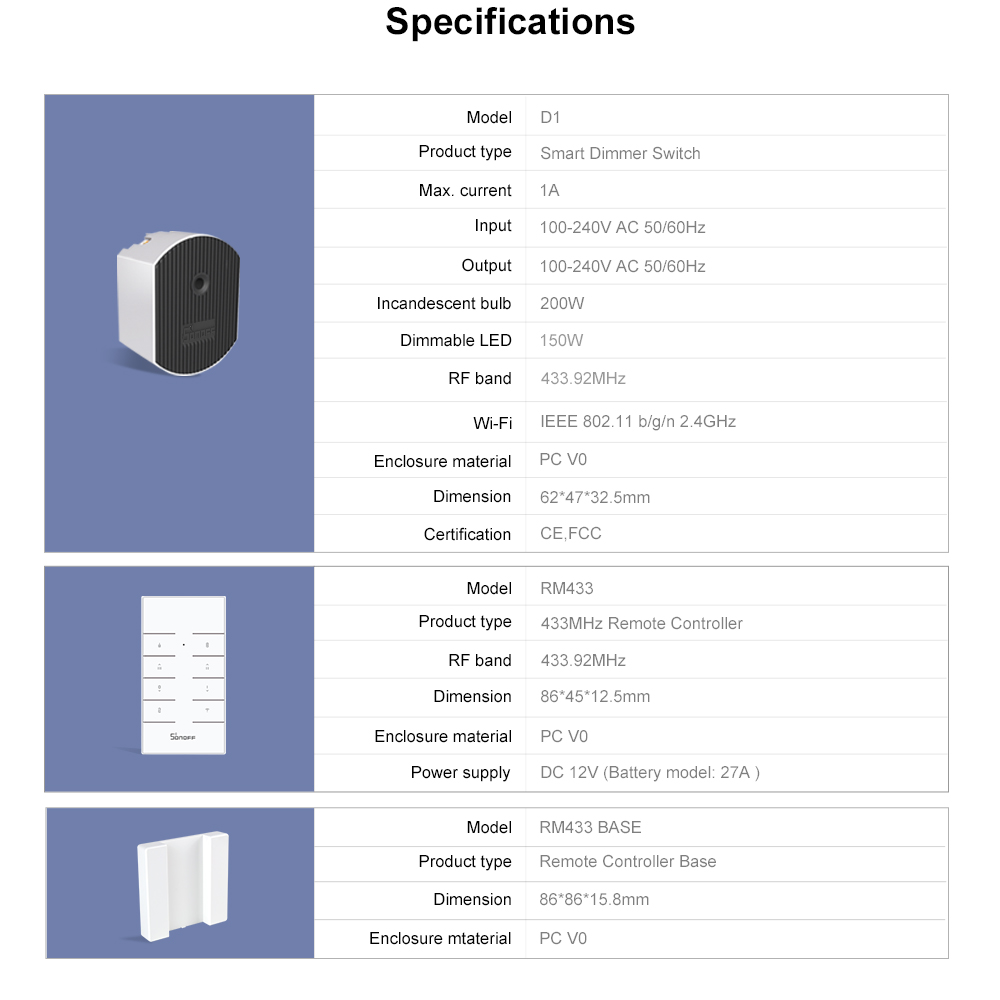 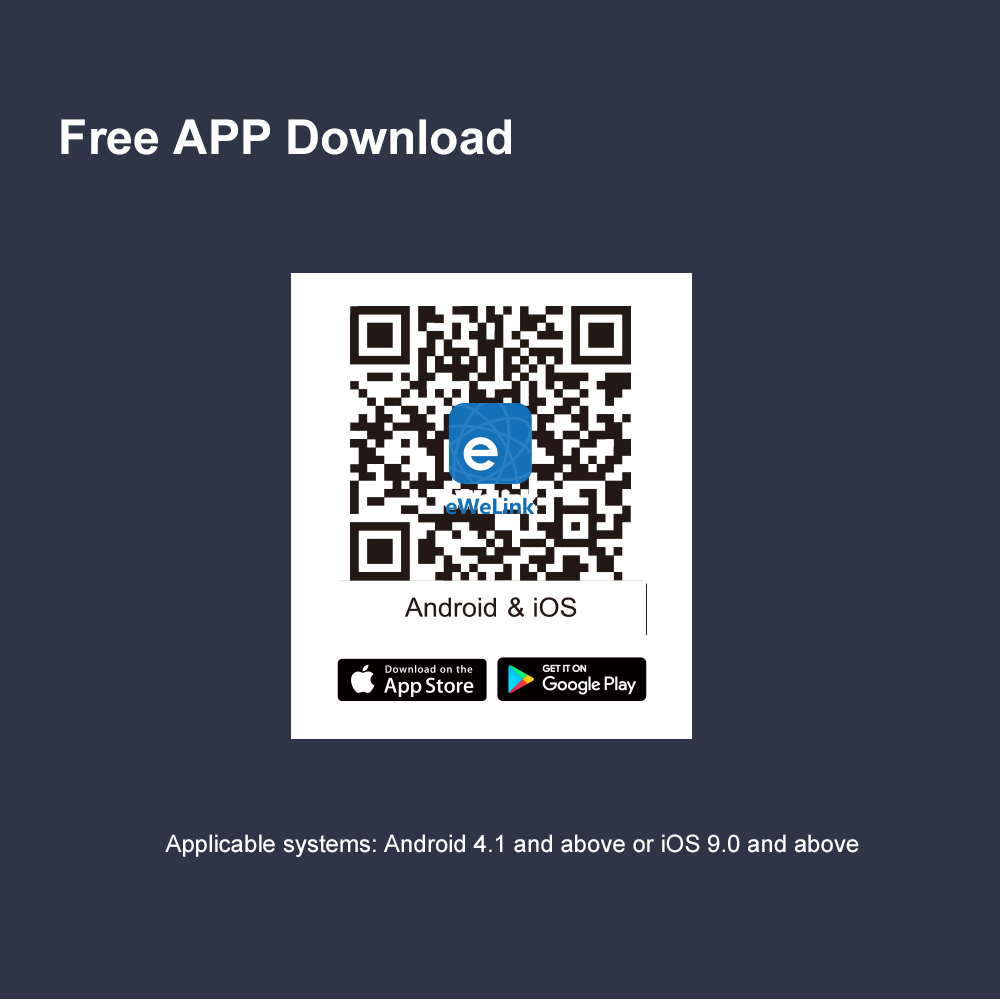 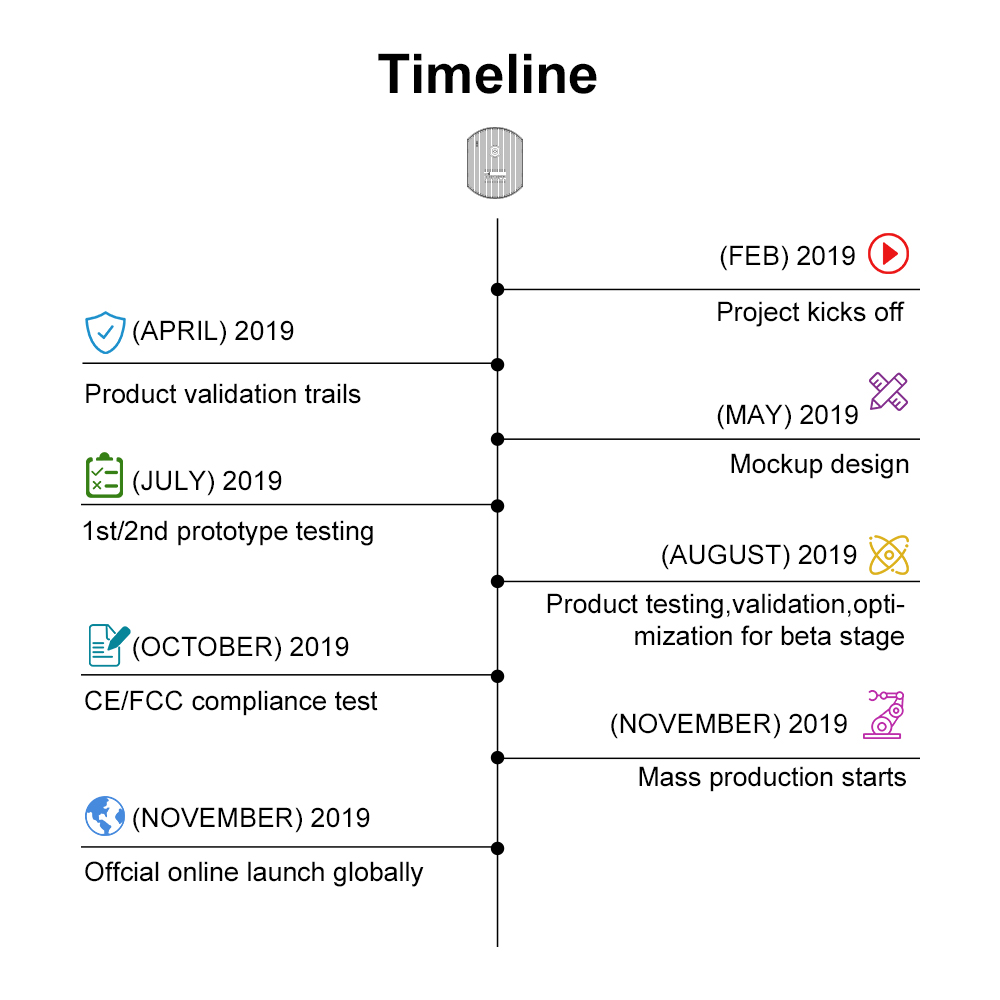 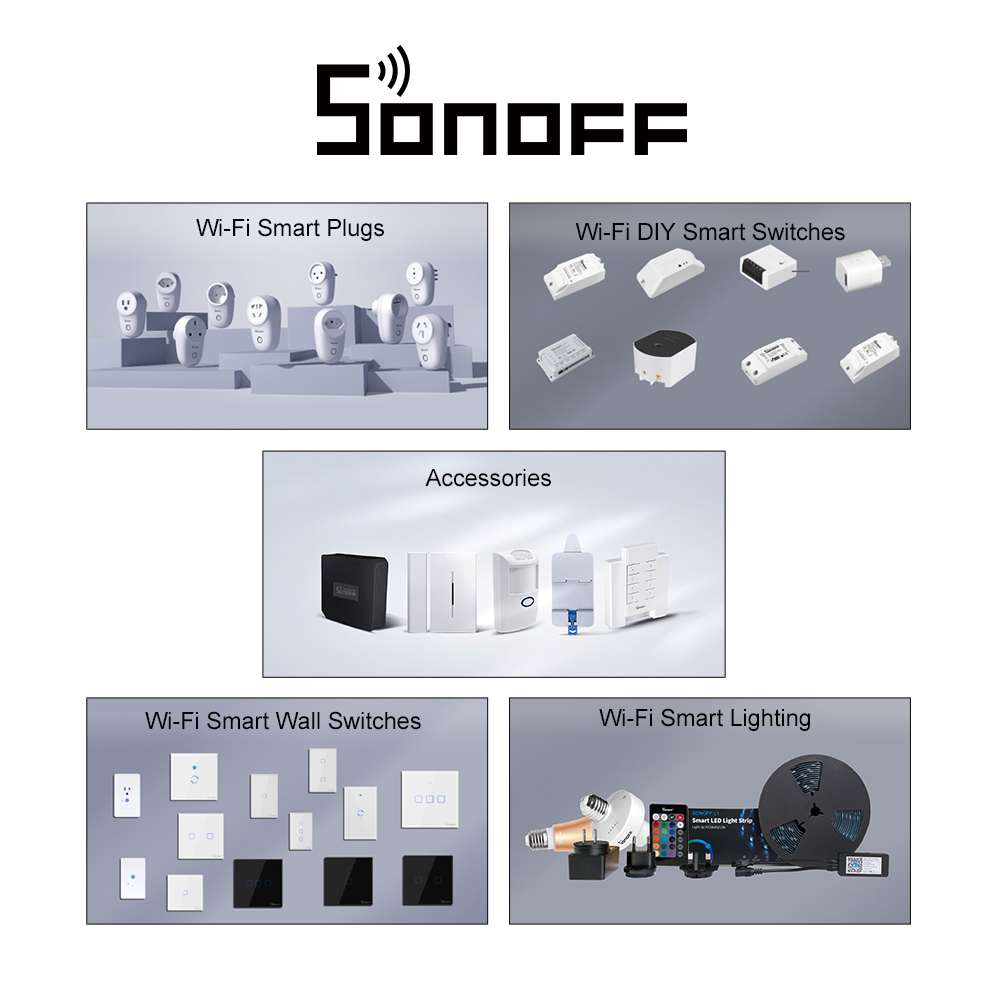 Due to popular demand, SONOFF eventually releases a new D1 smart dimmer switch. It excellently improves the lighting system in your home with different brightness levels. Turn on/off, brighten and dim the incandescent light bulbs and dimmable LED lights through the RM433 remote controller, eWeLink APP, Alexa or Google Home. The newly added sunrise and sunset mode are available in smart scene to activate your light when sunsets and inactivate it when sunrises. Amazingly, timing schedule and brightness setting can be enabled simultaneously in smart scene. It means that you can schedule the bed-room light to automatically turn on at 40% brightness at 7:00 AM and turn off at 100% brightness at 7:00 PM. There is a base for the RM433 remote controller which is used to be directly replaced your light switch and installed into the 86 type mounting box, everything looks perfect. Besides, the dimmer can be installed into the EU and US type mounting box. For the protocol document and the code for the DIY Mode tool (updating), please go to http://developers.sonoff.tech/sonoff-diy-mode-api-protocol.html

Please UPDATE firmware of D1 we are Many with the same "Ghost" problem with the dimmer turning on randomly.

Sorry for the inconvenience, our customer service team will contact you to help you solve this issue.

To get the device work reviring between the wall switcher and the lamp is needed in our house. Probably the same for many houses in Sweden due to electric wiring best practice in our country

Sorry for this situation, our customer service will contact you to help you solve this issue.

Hi the review was made last week

Also the shipmment is no yet in may hands still flying 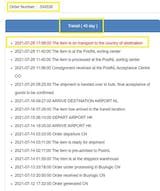 The last state means the bulb's state of the device is the same as before the power off.
I want to know whether the power-on state function of your device can work normally? If possible, pls share your expectation for this function with us.
As for the brightness adjustment of the bulb, have you tried adjusting the lowest brightness range in the device setting?
If you have tried it and it doesn't work, can you give us the model of Philips led bulbs? We would like to test then optimize the D1 to adapt to more models bulbs.

A
Andy
Works a treat.

These D1 dimmers are my most successful home automation. I had to replace a failed “conventional” dimmer switch, and tried a couple of alternative switches without much success; the main problem was the lack of neutral wire at the switch in Uk lighting wiring; the “no neutral” switches I tried just weren't up to it.

These are intended to be placed in the old switch box (behind the switch), but as I have wall fittings, I managed to place them inside the fitting itself. By bypassing the old switch (using a connector block to connect both wires from the old switch), the power is permanently on to the wall fittings with both live and neutral, so these dimmers are permanently powered as they need to be; the bulbs are now controlled exclusively by these dimmers at the fitting - which is “logically” no different from having a dimmer in the switch position. To avoid any future hazard for anyone maintaining the light fitting, I have just attached a “permanently live” tag; they should be pulling the breaker, but this alerts them that turning off the (now non-existent) switch is not sufficient.

As I have two wall fittings, I had to use two D1 dimmers; this does now give me the added advantage that I can control the lights separately, which I couldn't do before as they are on the same circuit. Both dimmers can be linked through the eWeLink app, and Google Home (probably Alexa etc, as well but I use Google). I had to use the app to set them up, but now I generally just use Google for convenience - the app is OK, but a faff to get to in a hurry, and I have no idea about how secure it is (but as I dont use it day-to-day, who really cares).

I had intended to just use Google as a “virtual” dimmer switch, and had set it to come on at sunset. However, clouds exist; it gets dark before sunset, so I conceded I still needed a simple manual switch for those times my phone or ipad are not actually in my hand. The best solution I’ve now got is the RM433 remote switch; it controls both lights (yes, two dimmers linked to one remote), which is placed on the old light switch position. This means to all intents, its like the old switch, BUT with the added advantage of being able to take the switch (remote control) off the wall if I want to use it and my phone or iPad is out of charge or elsewhere - so I can dim the lights from my chair, without moving 🙂

After a couple of failures to turn the lights on or off in the early days (or more usually one or other light) when using Google or the app, generally when trying to do too many operations or using both app and Google at (nearly) the same time, I now try to stick to Google, and its settled down to being very consistent and reliable.

The instructions on the RM433 were incorrect; they state the top left button is both on and off and the top right button is unused, but it turns out that top right is off!

I did have a period of confusion when one light appeared to be on (but still dark); after testing the bulbs, circuits and all sorts else, it turned out the dimmer was just set really really low! By going into the app, you can set the minimum level, and somehow that had got set to zero. The instructions are limited, but its worth just exploring all the settings in the app - there aren't that many, and its all useful.

Performance is good, the slow start and dim off features are nice (better on the eye, and better for the bulbs too), and dimming control is excellent. They are silent in operation, and no flicker at all from my LEDs. Linking to the app and pairing with the remote can be confusing (especially with more than one dimmer on the same circuit - so they both power on at the same time) but its just a case of repeating until they are all done.

This has been so successful, I’m working my way around other rooms now.